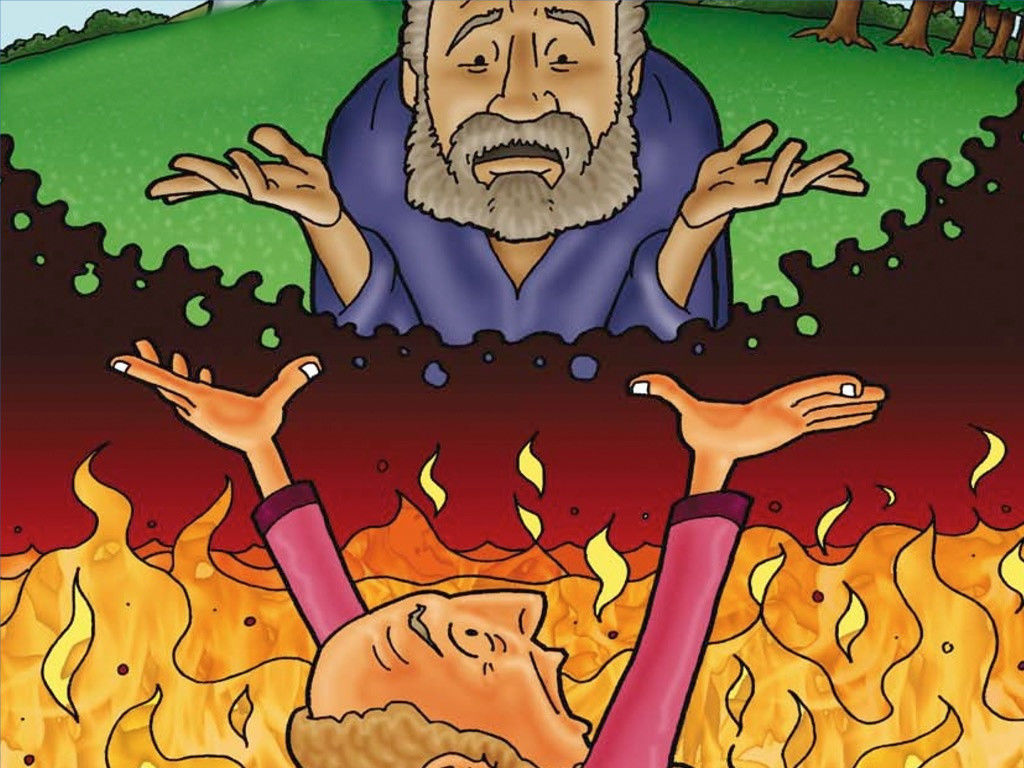 The Rich Man and Lazarus

19 “There was a certain rich man who was clothed in purple and fine linen and [a]fared sumptuously every day. 20 But there was a certain beggar named Lazarus, full of sores, who was laid at his gate, 21 desiring to be fed with [b]the crumbs which fell from the rich man’s table. Moreover the dogs came and licked his sores. 22 So it was that the beggar died, and was carried by the angels to Abraham’s bosom. The rich man also died and was buried. 23 And being in torments in Hades, he lifted up his eyes and saw Abraham afar off, and Lazarus in his bosom.

24 “Then he cried and said, ‘Father Abraham, have mercy on me, and send Lazarus that he may dip the tip of his finger in water and cool my tongue; for I am tormented in this flame.’ 25 But Abraham said, ‘Son, remember that in your lifetime you received your good things, and likewise Lazarus evil things; but now he is comforted and you are tormented. 26 And besides all this, between us and you there is a great gulf fixed, so that those who want to pass from here to you cannot, nor can those from there pass to us.’

27 “Then he said, ‘I beg you therefore, father, that you would send him to my father’s house, 28 for I have five brothers, that he may testify to them, lest they also come to this place of torment.’ 29 Abraham said to him, ‘They have Moses and the prophets; let them hear them.’ 30 And he said, ‘No, father Abraham; but if one goes to them from the dead, they will repent.’ 31 But he said to him, ‘If they do not hear Moses and the prophets, neither will they be persuaded though one rise from the dead.’ ”

So many people test God by saying, “If you show me a miracle I will believe in You.” This passage tells us that our belief isn’t necessarily based on what we see.  Faith is an issue of the heart.

In this parable there is a man in the place of torment, who was rich in his former life.  He sees Abraham in the place of rest and asks him to send someone, namely Lazarus, to warn his 5 brothers that heaven, and more importantly, hell is real.  In our natural mind we might agree that this plan would really change his brothers’ hearts.  However, Abraham answers him “If they do not hear Moses and the prophets, neither will they be persuaded though one rise from the dead.”

Wow!  As believers we should all thank God for the wonderful grace and mercy He has given us.  We know that God is real and that He has an awesome place prepared for us!

Sep 12
Turn Fear Over To God